THE HISTORY OF ACTION FOR DOGS

So many people ask – how did we end up in this job? Why do we spend all of our spare time, away from our friends and family, escorting precious dogs and cats around the world?

It all started in June 2016, when our founder Natasha made her first worldwide journey. Below she explains what the past few years have been like for Action For Dogs.

My first ever journey was out of necessity instead of choice. For several years I had become acutely aware while working in quite a laborious job in Thailand that my back pain had been getting worse, until one day I couldn’t take it any more. The local hospital diagnosed a slipped disc, and I couldn’t see how I would continue with my work without treatment. But I couldn’t imagine leaving my dogs behind in Thailand.

It was a difficult decision to make – I had been living in Thailand for nearly 9 years and called it home. Heading back to the UK seemed like a foreign land to me, although I did miss the chocolate, cheese and of course my family!

In June 2016, I loaded up my worst behaved dog into the back of a pet taxi, left the others in the capable hands of Jade, and headed off in the direction of our new life. My intention was to come back for the others, but life had other ideas for me.

The journey back with Megatron was… traumatic to say the least. I chose to take her back first as we had such a strong bond, and she really wasn’t happy when in the care of other people. Found on my way home from the supermarket one day, in the middle of the road lying heartbroken on a puddle of her dead siblings, I couldn’t really leave her behind. She was only 3 weeks old.

We had flown KLM to Amsterdam, and had no idea what we were doing. As soon as we arrived, we were swarmed by curious tourists. Meg couldn’t cope with being locked in the box with all those people around her, so I let her out and put the crate on a trolley. But she was too afraid to take a single step surrounded by all these people.

It was a long and arduous journey carrying meg (16kg), dragging my suitcases and navigating the public transport to the ferry which would take us to the UK. Once on the ferry, we both climbed into one of the kennels and slept for the journey. I wish I had known there were cameras in the dog kennels as I would have realised why everyone gave me a smirk as we disembarked the ferry!

After several months in the UK we had found our own place in the country, a small 2 bedroom house with a huge garden and only 1 neighbour for miles around. We settled in quickly, fattened up and decided it was time for the next member of our family to join us.

Rainbow was a very special dog indeed. She was found in the gutter at a very young age. In Thailand the night time temperatures can sometimes drop to 10 degrees, and 2016/2017 winter was particularly wet and cold. Rainbow had no fur – her skin was ravaged by mange and her immune system ruined. We had nursed her in Thailand almost back to perfect health so it was decided she should join myself and Meg in the UK.

I booked the flight and prepared to fly to Thailand to collect her on the Friday, but on the Tuesday received a devastating call. Rainbow had been poisoned and was on her way to the nearest vet, 45 minutes away. The neighbouring farm had laid poison down to prevent the spread of bird flu. 2 of the farmers own dogs had died and now Rainbow’s life hung in the balance. But her sickly, small body couldn’t take it. She died just as she arrived at the vets. We were all heartbroken and devastated.

As Thursday night came round, I didn’t want to go to the airport. I didn’t want to go back to Thailand. I didn’t want to return home with empty arms. The whole trip was for Rainbow, why else would I go? But then I received a plea for help from another rescuer. She had seen my heartbroken posts on Facebook and wanted to know if I was still going to Thailand. She had a dog she was desperate to get back to the UK. Would I bring her dog back in Rainbows place? Suddenly, I had a reason to get on the plane.

Leaving Thailand without Rainbow was a weird feeling. On one hand I was so, so sad that Rainbow came so close to coming home with me but didn’t make it, and on the other hand I knew that for this dog to have a chance at living in a safe, family home, this journey was necessary. This time as we landed in Amsterdam I knew exactly what to do, what trains to catch and how to navigate all the stairs on the ferry with a dog who had never walked on a lead before.

Handing over the rescued dog to her owners was bittersweet.

Those following months, more rescuers reached out to me who had seen our journey, had heard about Rainbow’s sad story, who also had dogs stuck in Thailand that needed to be moved to safety. Action For Dogs grew organically from that moment and what a beautiful adventure it has been.

In 2017 we helped 24 dogs fly to new homes. In 2018 that number grew to 62 dogs and 8 cats, and in 2019 we transported 138 dogs and cats to their safe and loving homes abroad. Our team has grown to 11 dedicated, animal loving staff members all committed to getting your pet home safely.

I now have my Thai dogs at home with me, running wild and creating mayhem but I wouldn’t have it any other way.

And it’s all thanks to you, Rainbow! 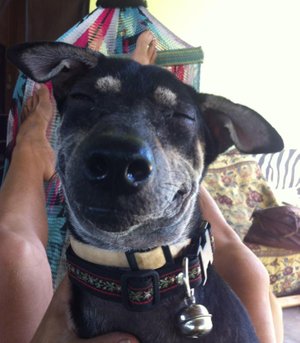 We are a UK Ltd Company (12102212), fully registered and insured Pet Transport, ensuring you peace of mind for the entire journey.