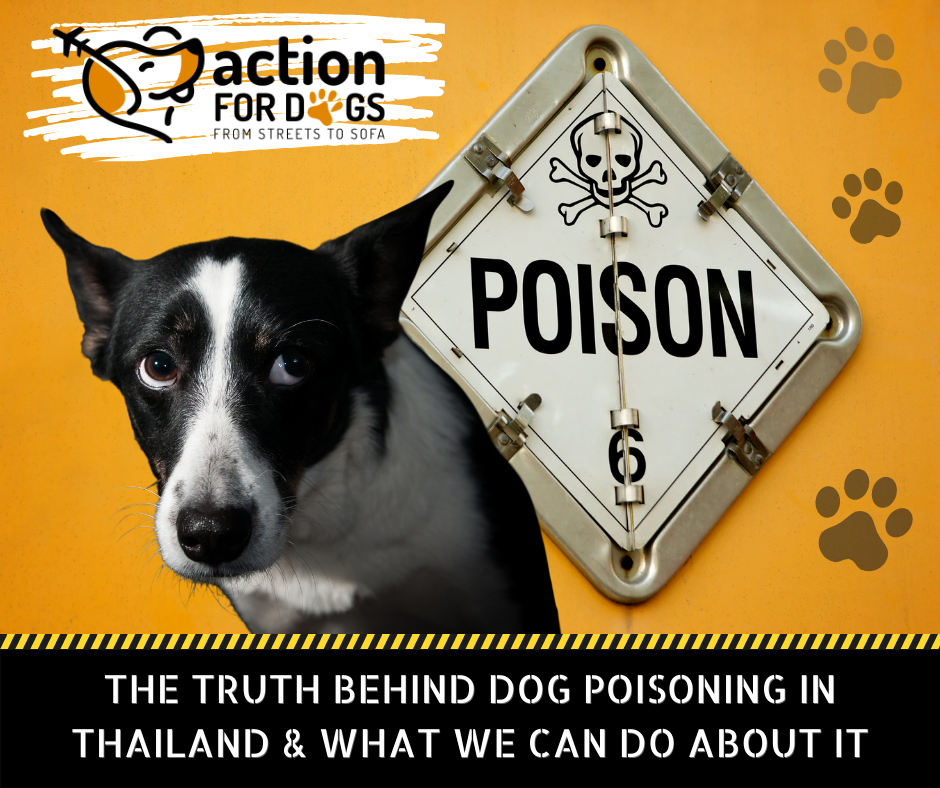 GAIN THE KNOWLEDGE TO HELP SAVE A DOG'S LIFE

When animal-rights groups rallied outside the Department of Livestock Development (DLD) head offices in Bangkok to protest against the cold-hearted slaughter of dogs back in 2018, we hoped it was the end to brutal poisonings of our beloved four-legged friends.

Sadly, this was not the case and as the numbers of strays continue to rise, so does the number of deaths by poisoning, but why?

At the time it was believed that the DLD wanted to eradicate stray cats and dogs. It was reported that they exploited the opportunity of declared rabies zones to round up and euthanize the helpless animals (whether this is still the case is speculation). However, three years on and with no reported rabies epidemic in Thailand we look at why we are witnessing the problem growing at an alarming rate. So how can we tackle this problem and stop the devastating effect it has on these beautiful creatures.

Why are dogs being poisoned in Thailand?

In 2015 Thailand’s Animal Welfare Act was introduced to serve penalties when people are found guilty of crimes against animals. The act prohibits neglect, torture, and uncaring transport of live animals, with offences punishable by law. The crimes carry with them a penalty to impose a two year-term in prison and a fine of up to 40,000 Baht ($13,000), or both.

Unfortunately, despite the law coming into place this horrific crime is still being committed.

Covid-19 continues to disrupt everyday life and with it has caused an increase in the number of strays. Expats have been forced to return to their home countries and many of their pets are sadly left behind. The added pressure of fewer volunteers to help aid and control the rapidly expanding stray population, combined with fewer food donations has forced these poor strays to find food in new ways, putting themselves at risk. All together it has created a devastating cocktail that a heartless individual is ready to slip some poison into.

There is no excuse to justify unlawful killings. Whether it’s farmers, worried about strays damaging their crops, land, or livestock. The fear of rabies or the anger at a neighbourhood dog barking, even the friendliest of street dogs can pay the price.

Poisoners kill in a way that separates them physically from the painful consequences, but they are as guilty as any dog abuser. Poison is indiscriminate as it’s not just strays that are caught up in these evil acts but also people’s pets. In Thailand, pets are given more freedom to roam. This can often lead to them eating poison whether they are the intended target of the selfish inhumane individuals who can bring themselves to do such a disgusting act.

The most common types of dog poisoning

A tasty piece of chicken or a tempting piece of pork is all they smell. If only we could communicate with these hungry hounds and warn them that this bite they take, might be their last.

Bait such as this is often laced with poison which will cause the dogs to endure a slow and cruelly painful death. Most commonly this comes in the form of Brodifacoum. A long-acting anticoagulant rodenticide usually referred to as ‘rat poison’, which is readily available in Thailand.

Brodifacoum blocks the production of vitamin K which makes it no longer possible for blood clots to form. The poison then causes excessive bleeding in the animal with no ability to stop it. Symptoms usually occur within a couple of hours but can be delayed and momentarily instil a pet owner with a false sense of reassurance that their animal will be OK.

Antifreeze poisoning is also another fairly common method used. The automotive radiator coolant is extremely toxic to dogs and is also very sweet, so they like the taste. As little as a tablespoon or two is added to water or bread and then fed to them. This small amount is enough to be fatal.

How do you know if a dog has been poisoned?

There are different signs of dog poisoning to watch out for, depending on the type and amount of poison which has been ingested.

In rodenticides such as Brodifacoum moderate to severe symptoms occur. Initially, blood loss is typically internal and signs include bleeding from the gums, black or red stools, lethargy, coughing, difficulty breathing (due to bleeding into the lungs), weakness, vomiting, diarrhoea (with or without blood). Less common signs include, nosebleed, bruising, bloody urine, swollen joints/lameness and in the most traumatic event can cause sudden death.

There are three stages identified with ethylene glycol (antifreeze) poisoning. The first stage occurs within the first 12 hours and looks similar to alcohol poisoning. Signs of walking drunk, drooling, vomiting, seizures, excessive thirst and urination are noticeable. The second stage typically takes place 12-24 hours after ingesting and the signs of “alcohol” poisoning appear to improve but underlying severe internal damage is still occurring. You may at this stage see the development of an elevated heart rate, increase breathing effort, and dehydration. 36-72 hours after stage 3 can occur. During this stage, severe kidney failure develops, and calcium crystals form in the kidneys. Severe lethargy, coma, vomiting, seizures and drooling can all take place during this last stage.

How to treat a dog that has been poisoned?

If a canine eats poison, it’s important to act quickly. If not treated as soon as possible it is most likely the outcome will be fatal, so time is the key. The first thing you should do is take the animal to a veterinarian as soon as possible. Here they will be able to carry out tests to determine the problem and what the dog is likely to have ingested.

How long it takes for a dog to be poisoned all depends on how much they have consumed. Although veterinary intervention is your first go-to if poisoning is suspected it isn’t always practical. For instance, if an animal clinic is closed or too far away then induced vomiting is a fast-acting method of attempting to save a life. We must stress this should not be attempted if the dog is already vomiting, severely lethargic, comatose, has a decreased swallowing ability, difficulty breathing, seizures or hyperactive activity. It is also advised that you only attempt to do so under the guidance of a veterinarian.

Induced vomiting is possible by feeding one teaspoon of 3% hydrogen peroxide per 5 pounds of the dog’s weight. In addition to vomiting, administering charcoal tablets or feeding egg whites to absorb the toxins can also be effective. Charcoal tablets are available from pharmacies and are considered safe for dogs in small quantities.

Vitamin K Therapy remains a long-standing treatment for rodenticide poisoning. A daily dose of the nutrient for 5 days, either by intramuscular injections or oral tablets. Followed by a reduced amount for a further two weeks has been proven effective but unfortunately is not a guaranteed cure.

There is an antidote for antifreeze poisoning, which is called fomepizole (also known as 4-MP). This medication is known to have helped dogs when administrated within the first 8-12 hours of ingestion ethylene glycol. 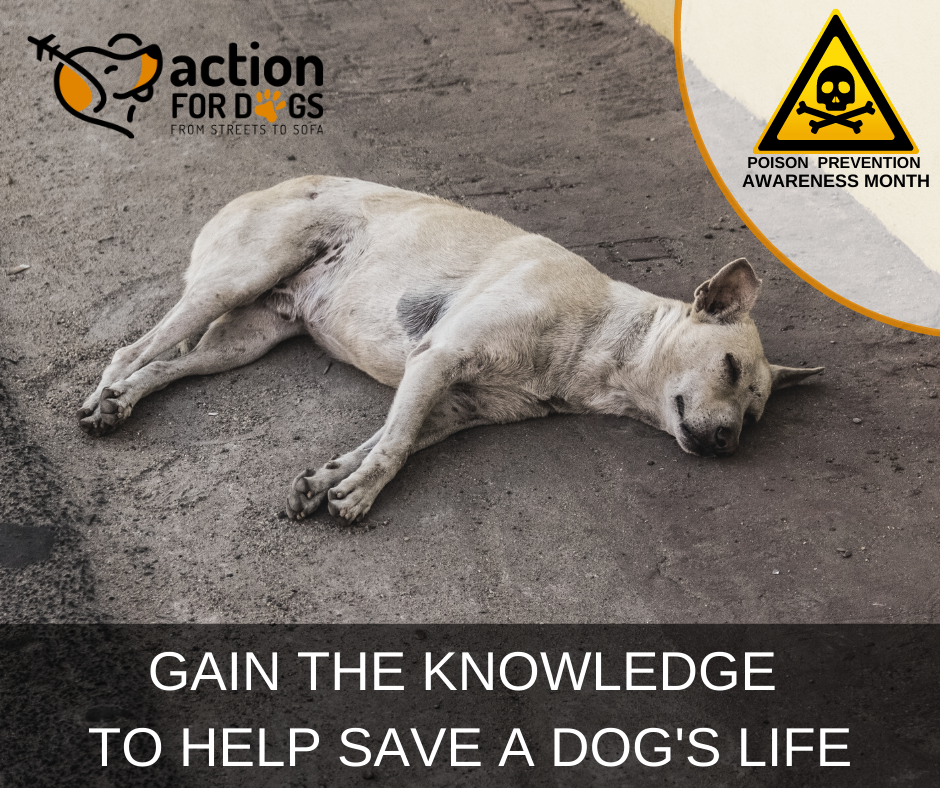 This is Luna (also known as Lily). The ability to brighten up any place she went with a warm welcome, her kind heart and gentle way. Luna was just one of the thousands of dogs taken too soon through cruel poisonings each year. In 2019 Luna was poisoned around her home of Koh Phangan. With the help of a few heroes, she was taken to an animal clinic where she was treated by a vet. Luna battled and after a few days finally awoke. There were signs that she was recovering as she was given medicine and lovingly cared for over the next few days. But sadly, despite all their efforts, this lovely soul didn’t make it.

There are ways to help stop this senseless suffering to more dogs. If you know of a purposefully poisoned animal please report it to your local law enforcement. Make a police statement and provide the police with photos and videos of any sick or dead dogs. Distributing Watchdog Thailand anti-poisoning posters in the area and offering rewards for information about the incident are additional ways that we can prevent these horrible acts from reoccurring. Together we can make a stand and help catch or deter those who carry out the act.

We are a UK Ltd Company (12102212), fully registered and insured Pet Transport, ensuring you peace of mind for the entire journey.